Chop the butter into roughly 1cm cubes, trying to make sure it warms up as little as possible.

If you don't have a food processor put the flour, icing sugar, cocoa and butter cubes into a large mixing bowl. Rub the butter lumps in to the powder mixture with your finger tips (it can help to have run your fingers under the cold tap for a while to cool them down) until the mixture resembles rough breadcrumbs. Beat the egg with the cold water, and add the result to the flour mixture in the bowl. Mix slowly until you have a single ball of dough.

Regardless of how you made it take the resulting ball of dough and knead for a few moments on a lightly floured surface until the ball stops cracking as you knead it. Then wrap the ball in cling film and put it in the fridge to chill for about 30 minutes.

When you get the dough out of the fridge turn the oven on to 170C fan, and put a baking tray on the top shelf to heat up.

On a lightly floured surface roll out the pastry so that it comfortably lines your tart case, leaving the excess hanging over the sides. Line the tart with foil or parchment and fill with baking beans and blind bake on the pre-heated baking tray for 15 minutes. After 15 minutes turn the oven down to 160C and take the beans and foil/parchment out of the tart, before baking for another 10 minutes.

Take it out and leave to cool while you make the filling.

Melt the chocolate and butter in a bowl over a pan of gently boiling water. Once it's completely melted put it aside to cool.

Then put the sugar and golden syrup in a pan, mix them together and gently bring to the boil. As soon as it boils take it off the heat and leave to cool.

Lightly beat the three eggs in a large bowl and as soon as the chocolate and syrup/sugar mix has cooled, mix them both thoroughly, along with the vanilla extract, in with the eggs until you have a smooth even coloured mixture. Then mix in the pecans.

Pour the mixture in to the tart case and bake for 30 to 40 minutes (at 160C). You're looking for a slight wobble and gentle browning round the edges to know that it's done.

Take it out, leave to cool and then serve with whipped cream or vanilla ice cream. 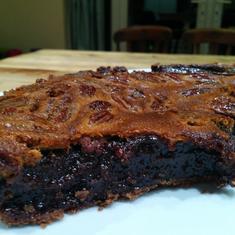