This recipe is a bit of a blast from the past. My great grandmother used to make gnocchi on a regular basis. My favourite was to fry left over gnocchi with butter in the morning for breakfast.

It helps to have an extra set of hands for this bit as adding flour becomes difficult when your hands are all sticky with dough. Keep adding flour until the dough holds together and looks similar to a bread dough.

Pull off a fist sized ball of dough. Roll the dough into a long string about as thick as your finger. Use a butter knife to cut off little chunks. Place the chunks onto a floured tray. (Repeat until all the dough is used up.) Place the trays in the fridge to set for 30 mins.

Boil some water and place the gnocchi in the boiling water. When the gnocchi are ready they will float to the top. Fish them out with a slotted spoon. I always have a pan brushed with butter waiting, so that I can do a whole batch and place them in the oven without the gnocchi drying out.

Serve with any number of sauces....plain tomato works a treat! 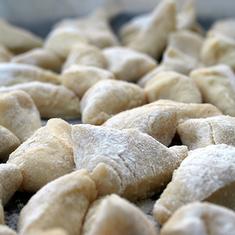 This is what they should look like just before you drop them into the pot of boiling water. Enjoy!
View on Flickr