Paneer and lentil one pot curry

Vegetarian. Full of protein. Ludicrously filling. 600 cals if you eat half, 400 if you split it into three (still massive) portions.

Cut the paneer into roughly 1cm cubes. Get half the oil hot in a large frying pan and fry the paneer cubes for a couple of minutes until they start to take on a bit of colour. Take pan off the heat, take the cubes out of the pan and put to one side for a while.

Peel and roughly chop the onion. Peel and grate the ginger and garlic. Roughly chop the finger chillis (seeds in). Get the rest of the oil hot in the same pan and then put the onion, ginger, garlic, chillis, aniseed/fennel seeds (if you have them) and salt into the pan. Turn the heat right down and leave to cook slowly while you prepare the rest of the ingredients.

Put the ground spices in with the now softened onions and so on in the pan and give the pan a good stir. Roughly chop the tomatoes and then add the paneer, the rice, lentil and pea mixture and the chopped tomatoes to the onions in the pan. Stir very well and allow everything to warm through for a couple of minutes. If you've got the fresh coriander roughly chop it and stir it through.

Split into two portions for a very filling evening meal, or into three for lunch. Can be left to cool and eaten cold as a salad for a few days if you keep it in the fridge. 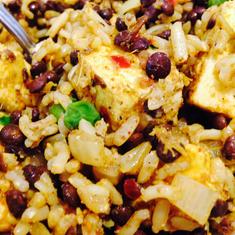